We are immersed in an anti-historical process that is unintelligible, incalculable and impersonal. To embrace all these terms, we can use the concept of, as Marx did, alienation.

An authentically historical process, on the other hand, would be geared towards human progress through humanity itself. The process would therefore be personal because it represents what we all are and cannot help not being, i.e., human. It will also therefore be more intelligible and because of that more calculable and consistent. In a world designed for the well-being and progress of humanity concepts like freedom and justice become less ambiguous.

When one knows why we are doing things, satisfaction and happiness through purposefulness and meaning are much easier to find and the authentic historical path forward for us is revealed.

Pleasure gives us a purposiveness to preserve that which we like.

This idea is Kantian[1]. In linking pleasure with preservation, it also ties it to the will for permanence and removes it from pleasure as a hedonistic love of the ephemeral.

In this way, we find that there are two kinds of pleasure: the superficial (ephemeral) one and the deeper one that is tied up with this will for permanence.

Kant was investigating aesthetics when he brought this up, and in fact it is this double pronged idea of pleasure which explains the need for aesthetics as a need for understanding the pleasure that things can give us in order to understand the need to preserve them.

It there is a necessary purposiveness in preserving humanity, then perhaps this can be inculcated via the development of an aesthetics of humanity, a way of looking at ourselves that will foster the deeper pleasure instincts of the will for permanence.

By dwelling on the beauty that is humanity we encourage ourselves to strengthen the human and mould ourselves into good human-beings: a concept which can only be properly understood once we have learned to see the beautiful within what humanity is.

An aesthetics of the human would need to be disinterested in anything other than the authentically human. Any study of this aesthetic would therefore have to distance itself from the ugly humanity that we are, in order to find the beautiful humanity that we should be.

This concept should not be seen as Idealist, but rather as a kind of positivistic deconstructionism. The only way to know what we should be as authentic human beings, is to dismantle the errors that have shaped us into the monstrous form that humanity is today. Only by unveiling the ugliness of what we are now, can we see the beauty of what we should have become (and can become in the future). This unveiling demands a dismantling of all interests that divide humanity: all nationalisms; racial or religious divisions; as well as all economic interests and ideologies of class.

An aesthetics of humanity might not only be a way to ensure the permanence of the human race, it could also create an authentic design and composition for humanity or for human progress.

Technology, seen from the perspective of the aesthetics of humanity, is either an ornamentation that takes away from the genuine beauty of humanity, or it is an extension of the beautiful picture itself.

Every living creature, and, of course, every human being, has a spiritual tie to nature. It is the cosmos that has created us, moulding us out of itself, and pre-programming us through our DNA to eventually return to it when our physical life deteriorates or is broken and dies.

All spiritual linkage, therefore, should be not with the land or with the country, or with the people who speak our language, but with the Universe.

From this stand-point, human culture has been a steady process of psychologically dis-possessing us from our authentic home, which is the entire Universe. This dis-possession begins with our parents and the immediate family that take possession of us immediately. An initial dis-possession that spreads itself out into the extended family, then our friends and neighbours, and little by little all this dis-possession through kinship dissolves into the great dis-possession by the cultural environment of the state. 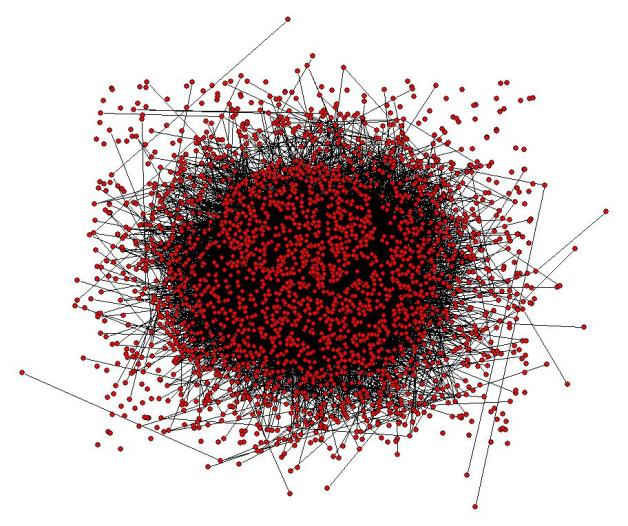 In an art with depth, the object is not really there. In a sense what is given in this kind of art is a specular image reflected into a third mirror (see our earlier essays on Rodrigo Garcia, Luigi Nono and Zabriskie Point). What this does is add distance to any mimicry, and, at the same time, to any complexity. Deep art should be imagined as a kind of maze which first appears as a box or room, but with invisible doors or walls that can be pushed open if one knows how. These doors lead one into more spaces of different sizes, each one with its own exits unto more seemingly enclosed systems. The richness of the experience lies in the fact that each exit can only be discovered if one can know or can discover the symbolic reference to the next space.

Could the Internet be considered an autarchic experience of deep art? In order to do so, one would need to be willing and capable of losing oneself within it, and likewise be capable of stepping away from it in order to analyse the experience from the advantage of distance. What’s more, for a deep art experience to take place, one must be prepared to pause and linger at times, so hard in the Internet which obsessively pushes any audience on to new topics, inviting, tempting, forcing us at times to leave the room we first of all settled in. The Internet experience can get so foggy that we even forget where we started from. For a deep art experience to be meaningful one must have one’s imagination firmly rooted in where one came from in the first place. It is a labyrinth in which one never completely loses touch with the original point of departure. The original room is that which allows us to navigate: forgetting where we are coming from will make it impossible for us to find our way forward or back. It is only by learning how and when to move slowly through the maze that one can dominate it and allow it to become an enriching rather than a frustrating experience.

Or perhaps the Internet is too autistic to be truly satisfying. It has its webcams and its chats, but they don’t belong to the autarchic labyrinth we are interested in here. What we are interested in is its power as a vital museum, come encyclopaedic library, come art gallery, come theatre and cinema and concert hall. But its very immersing quality robs us of the real vital experience we have when we go to these traditional spaces to witness art. It lacks the public. And here we must ask ourselves: how much does the experience of great art depend on it being a public act? Or, should art be classified into the public and private experience? Theatre, for example, is impossible to conceive without an audience (the more the merrier), whilst a novel is a purely private experience (a public reading of a novel is hardly likely to be as enjoyable as the experience of reading to oneself). Could it be said that the richest art-culture experience has to include both possibilities? Does the Internet do this, if only potentially?

Does the Internet disclose any truth? Or even attempt to disclose truth? And, what kind of intersubjectivity is unleashed in its relationship between the artist and the spectator? Only when the Internet is used in its immense folding and unfolding capacity, in a meaningful disclosing way under an artist’s control, will we be able to consider it capable of offering a deeply artistic experience. This is possible. It is certainly a potentially powerful tool for accessing information, and culture is information. What Internet does, by presenting a potential access to universal information and culture universally, is pave the way to a universal culture, which, if it is honestly expressed, must be an authentically human culture. Whilst the Internet is free from manipulation and censorship there is hope for a universal, human cultural development. In fact a free Internet is humanity’s best chance for a free world.

The Twitting Tweets or the Tweeting Twits